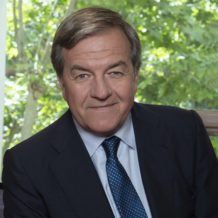 With degrees in Law and Business Administration from the Instituto Católico de Administración y Dirección de Empresa (ICADE), Jorge Villavecchia has been CEO of Damm since 2001.
He began his professional career as Corporate Banking Manager at Banco de Progreso (Grupo March) in 1985. In the following years, his career progressed through various management positions in the investment banking sector – Gescapital, Schroders and Citigroup – until becoming CEO of Damm in 2001.
Over the last 20 years, Villavecchia has led the growth of this company with industrial origins and overseen its comprehensive transformation into a large group which is leader in the sectors of beers, beverages, food, casual dining and distribution.
As CEO of Damm, Villavecchia has also driven the internationalisation of the company’s flagship brand, Estrella Damm, which is currently present in more than 100 countries and has won numerous awards around the world.
Under Jorge Villavecchia, Damm has gone from employing a team of 1,000 people in 2001 to more than 5,000 today, with a turnover of more than €1,500 million.
Jorge Villavecchia is married with two children, and as well as Spanish speaks English and German.