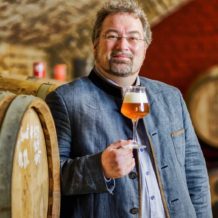 Markus Raupach worked as a photographer, journalist and media professional for breweries, hotels and restaurants soon after the founding of his media agency in 1998. Since 2005, 43 books have also been published by him, including brewery guides for Franconia, Bavaria, Saxony, Thuringia and Berlin. From numerous events, which he organized since 2006, the idea of a beer academy arose, which he realized in 2013 with the foundation of the German Beer Academy, for which he was awarded the “Golden Beer Idea 2015”. In 2019 he received this award again, this time for the realization of his idea of a “Walk of Beer” in Forchheim. Markus Raupach is  beer, brandy and cheese sommelier, experienced judge (i.e. World Beer Cup, European Beer Star, Brussels Beer Challenge, World Beer Awards), member of the British and the North American Guild of Beer Writers, Board member of Bierland Oberfranken and the Association of Bavarian Brandy Sommeliers. In 2017, industry representatives selected Markus Raupach as one of the 50 most important beer personalities in Germany. 2019 he became the first President of the German Beer Consumers Union (GBCU), a member Organisation of the EBCU. In 2020 he invented the first Online Beer Sommelier Training and started his Podcast „BierTalk“.

BACK TO LIST OF SPEAKERS
← Markus, Maria Bouckaert, Peter →
Skills Posted on