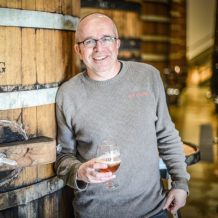 Peter wrote after 30 years working with wood barrels the book: “Wood and Beer, a brewers guide” together with Dick Cantwell.  A century had passed since a book considering wood in beer had been published

Peter is currently brewmaster and co-owner of Purpose Brewing and Cellars in Fort Collins, Colorado and runs BierBouckaert Consult international since 2017.

He started to love beer while growing up in Belgium and went on studying for brewing engineer at the University of Ghent, Belgium.  Zulte was the first brewery he worked in, one of the breweries of the group Kronenbourg at that time.  He went on and became brewmaster in Rodenbach for almost 10 years.  He also worked with Brewery De Gouden Boom and started his own brewpub, De Zwingel in Harelbeke in 1994.  In 1996 he moved to the US to join New Belgium Brewing where he was brewmaster until 2017.  This fast growing, always expanding brewery was really a fun ride culminating in design build and start up the new brewery in Asheville.

He gains various expertise along the way, from brewing/distilling to being a Black Belt Six Sigma in quality, board member for various breweries and trade organizations, to being a small business owner on two continents.  He published on sour beers, fermentation modeling and metabolomic profiling of beer.

Together with Dick Cantwell he wrote the book “Wood and Beer, a brewers guide”.  Other publications are in metabolomic profiling of beer, fermentation modeling, sour beer and even cave geology.

Peter is happily married with Frezi and has two sons, Wout and Jo Wolf.

BACK TO LIST OF SPEAKERS
← Rampach, Markus Srivastav, Preeti →
Skills Posted on