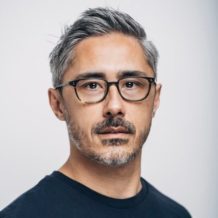 Kevin Patricio is the co-founder and CEO of Basqueland Brewing. Kevin emigrated from the United States in 2011 with his family and now resides in San Sebastian, Spain. Kevin’s professional career started in New York City at Food & Wine Magazine in 1998. After six years at the magazine he left to pursue a career in the kitchen. He continued to consult for media and spirit companies until the kitchen took him completely. He trained in renowned restaurants such as The Red Cat, Blue Hill and Arzak. It wasn’t until he was running a kitchen in San Sebastian in 2011 that craft beer became a passion.

“In the USA, I took the availability of craft beer for granted. Almost everywhere you go, you’re never far from good beer. That all changed when I got to the Basque Country in 2011. The craft beer culture was pre-embryonic. While the motivation was different for my two partners, I really wanted to complete the experience for my customers at the restaurant. Great everything: service, food, wine, cocktails, and beer. We started Basqueland and we were off!”

It can be said that Basqueland is best known for their IPAs, from West Coast to DDH and session to DIPA. The team takes great care with all styles from its crisp, clean Santa Clara Helles Lager to massive pastry stouts. “We strive to make the best beer we can in whatever style.”