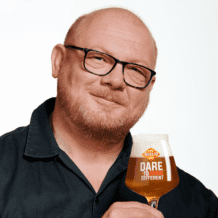 For well over thirty years, my life has been all about beer. Flunking out of University because of my side-job as a waiter in De Pilsener Club turned out to be one of the best things ever happening to me. My eleven-year career as a waiter was crowned by winning the title of Holland’s ‘Best Beer Tapper’. In 1998 I joined Bier&cO, one of Europe’s leading beer import and distribution companies, dedicated to bringing craft beer from all over the globe to the people. Having held various positions within Bier&cO, I eventually shaped its Export department by representing a handful of American Craft Breweries. Together with a handful of others we pioneered the European market which helped start a European ‘beer revolution’.  Today I am Beer Ambassador at Bier&cO, travelling around the globe, promoting and educating about a portfolio of special, exciting and one-of-a-kind craft beers. I am a regular contributor to a wide variety of (inter)national beer magazines and have written various books on beer. As a judge I served on many (inter)national beer contests, am a Herald in the ‘Low Lands Beer Society’, an Honorary Knight of the ‘Knighthood of the Brewer’s Mash Staf’ (aka Belgian Brewers Guild) and a certified beer sommelier (Doemens Diplom-Biersommelier). I co-founded the ‘Dutch Beer Week’, a typically ten-day event to celebrate and enjoy each and every Dutch beer, as well as the ‘Dutch Beer Challenge’, a competition for Dutch beers. I like to see myself as a professional beer connoisseur who has had the pleasure of making a hobby out of his work. Cheers!

BACK TO LIST OF SPEAKERS
← Srivastav, Preeti Strijp, Etienne →
Skills Posted on