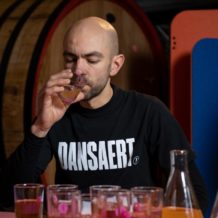 Tiago is a Lambic brewer in Brussels, at Brussels Beer Project.

A brewing journey around the world has taken him to Belgium, starting in Brazil at Cervejaria Falke Bier. After a few years in contact with the Italian craft beer scene in Rome, Tiago landed in London at the beginnings of Beavertown Brewery, where he helped it grow to the next level and launched their wood aging project “TEMPUS”.

Tiago left London on a bicycle and toured for 1 year and a half around Europe, brewing several beers across the continent. An intermediate stop in Belgium at Brouwerij Alvinne was a determining factor that sparked his passion for Belgian wood aged sour beers.

In Copenhagen, Tiago took on the challenge to develop and brew the beers of Broaden & Build Brewing Company in Copenhagen, an innovative concept integrating brewery and restaurant, putting together the minds of brewer and chef to create new flavours in beer.

In 2021, back in Belgium, Tiago joined Brussels Beer Project, where he currently brews the beers of “DANSAERT”, the first new Lambic maker in 50 years in the city of Brussels.

BACK TO LIST OF SPEAKERS
← Lichota, Jan Webb, Tim →
Skills Posted on