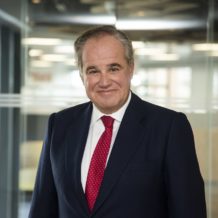 Demetrio Carceller Arce is a leading Spanish business person, who plays an important role in the food and drinks, infrastructure, services and energy industries. Executive Chairman of the Damm beer group and of the oil and derivatives company Corporación Petrolífera Disa, Demetrio Carceller Arce is also Vice-Chairman of the leading food multinational Ebro Foods and of the construction company Sacyr. During more than three decades as a business leader he has demonstrated his strong commitment to innovation, internationalisation, diversification, sustainable growth and corporate social responsibility.

A consummate polyglot (he speaks Spanish, English and German fluently), he brought an international perspective to his companies long before globalisation became an imperative. He has an in-depth knowledge of the sectors in which he moves and is passionate about technology, to the point of personally leading the digitalisation of the companies he manages. Sustainable growth, adding value for investors, consolidating profitability and maximising the efficiency of production have been constant factors in his business career, while promoting and keeping in-house talent. Additionally, investing some of the company’s profits back into society, being able to evolve quickly to adapt to rapidly changing times, staying ahead of new trends and always acting with strategic vision are the main keys to his successful management as a business leader constantly striving for excellence.

Born in Madrid in 1962, Demetrio Carceller Arce graduated in Business Administration from the Colegio Universitario de Estudios Financieros (CUNEF) of the Universidad Complutense in Madrid. Later he studied an MBA at Duke University (Fuqua School of Business), one of the most prestigious universities in the United States and whose faculty includes several Nobel prize winners.

In the area of corporate social responsibility, which is fundamental to the companies he leads, Demetrio Carceller Arce chairs the Damm Foundation and the Disa Foundation. The mission of the Damm Foundation is to support and publicise Damm’s sports, social and cultural sponsorship and philanthropical activities. Every year more than 300 young people participate in Damm’s educational project, absorbing the values of sport through football and padel training clubs. In the cultural field, Damm supports talented young musicians and musical institutions including El Gran Teatre del Liceu and the Palau de la Música in Barcelona. The Disa Foundation supports various social, environmental, sports, cultural, scientific, educational and research projects.

A great lover of culture, Demetrio Carceller Arce is a member of the Board of Protectors of the Teatro Real Foundation, an organisation which promotes society’s participation in the cultural development of the city of Madrid. Within the beer industry, he is now President of Cerveceros de España (The Brewers of Spain). Previously Carceller Arce has been President of the Sociedad Anónima Española de Fomento del Lúpulo (Spanish Limited Company for the Promotion of Hops) (1997-2001) and also President of The Brewers of Europe (2012-2016).

BACK TO LIST OF SPEAKERS
← Saez, Cristina Walsh, Derek →
Skills Posted on