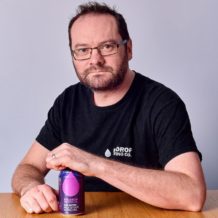 Rob Fink launched Big Drop as the world’s first brewing company dedicated to alcohol-free beer in 2016 with his old school friend and bandmate, James Kindred. As fathers, they were looking to cut back on the booze but couldn’t find any decent alternatives to our favourite craft beers. A lawyer at the time – with zero experience of brewing – he began in a small brewery in Bermondsey intending to develop a business model to contract brew through a network of brewing partners worldwide, so he could produce fresh beer – locally and ethically – with minimal carbon footprint. Together with experimental brewer Johnny Clayton (now head of production), they pioneered a new way of making alcohol-free beer called Reduced Amalyse Brewing (fully fermented brewing cycle without ever rising above 0.5% ABV – so retains all the flavour and means nothing extracted). Recognised as the market leader in the rapidly growing AF craft beer sector, Big Drop has won over 80 international beer awards including a record seven times ‘World’s Best’ at the World Beer Awards – more than any other brewer. Big Drop will make 5 million cans this year and can be found in over 10,000 locations worldwide – including throughout Europe, Australia, Canada and the US. In the UK, it has retail listings with Sainsbury’s, Waitrose, Morrisons and Ocado.

BACK TO LIST OF SPEAKERS
← Janssens, Philippe Wegner, Rodger →
Skills Posted on