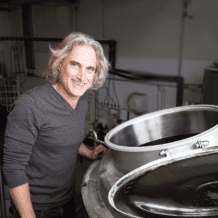 Gregor Engler, passionate Master Brewer, pioneer of French craft brewers created CAP D’ONA more than 20 years ago; only brewery in the south of France at that time, the first brewery in catalonia.

Grandson of a Lorraine brewer, he grew up on a sailboat, having explored different countries, then in Catalonia, where he fell in love with its lands, its terroir and its values.

He decides at the age of 23 to take over the family know-how in this region which makes him vibrate so much. He trained thanks to his grandfather, perfected his skills at the French Brewery and Malting Institute in Nancy and developed his creativity, his consistency of excellence in the heart of his vats and his barrels in Argelès sur mer. , in his factory.

He thus combines his 3 passions: his love of beer, the sea and the Catalan terroir by producing his beers with a strong local identity almost with their feet in the water. His beer will be called “CAP D’ONA” meaning in Catalan, “the top of the wave” summarizing in 2 words our creator so inspired and avant-garde. Since then, his brewery has never ceased to create beers, each more beautiful and innovative than the next, which earned him the nickname “the goldsmith of beer” Gregor Engler was ranked in 2021 in the top 3 of the world’s brewers at the World Beer Challenge. Thanks to its know-how, its desire for originality, identity and perfection, Cap d’Ona Beer has evolved without ever losing sight of the primary values ​​of its inspired creator: Authenticity, Creativity, Exigence, Excellence.

Favoring quality over quantity, this ultra-innovative authentic brewery has been voted BEST BEER IN THE WORLD, more than 50 times Gold Medalist in the most prestigious national and international brewing competitions in recent years.

BACK TO LIST OF SPEAKERS
← Dunnink, Frits Lukhardt, Jens →
Skills Posted on